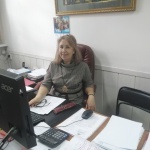 On September 22-23, 2020, Buryat State University took part in the second Salon of Siberian-French Higher Education on-line. The new conditions did not become an obstacle to continue long-term cooperation between Russian and French universities, which has a history of more than 50 years.

The Salon was organized by the Center for Siberian-French Cooperation under the leadership of Michel Debrenn, the Professor of the French Language Department at the Humanitarian Institute of NSU, the holder of the French Order of the Legion of Honor. The main goal of the event was to attract Siberian universities to cooperation with French educational and scientific institutions for joint projects, as well as the experience exchange in the field of international cooperation between Russia and France.

The second Salon was attended by 14 Russian universities from Tomsk, Tyumen, Novosibirsk, Krasnoyarsk, Irkutsk, Ulan-Ude, 12 higher schools and 11 universities of France. The meeting was organized in two stages:

According to the results of the Salon, the International Relations Department of BSU and the German and French Languages Department represented by Koreneva M.R. are planning to work closely on cooperation in the field of academic mobility of teachers and students, attracting trainees and creating joint educational programs.